SNODGRASS HILL – THE BATTLE OF CHICKAMAUGA 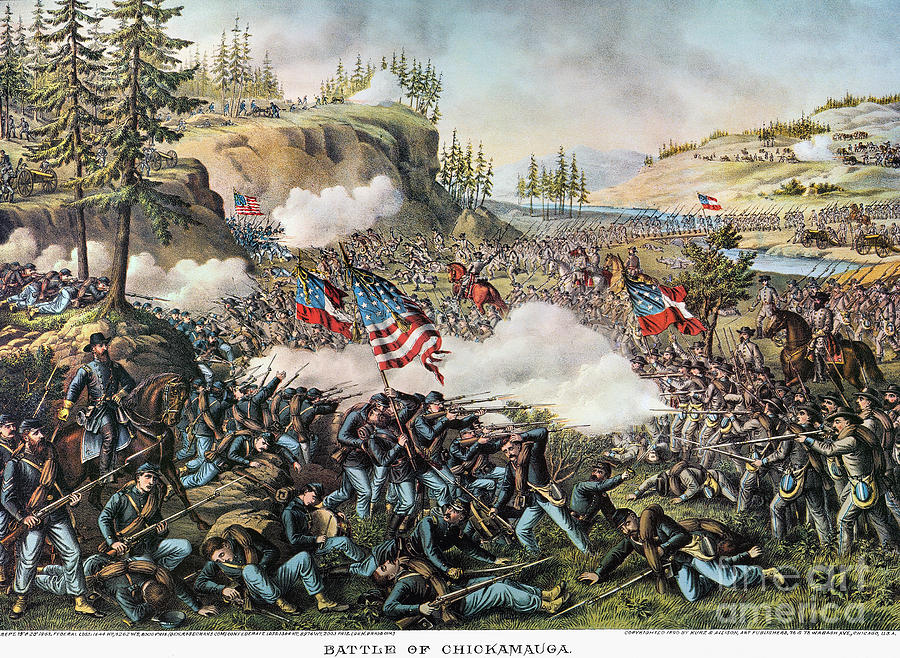 The Battle of Chickamauga lasted for three days, Sept.18-20, 1863. It was the worst Union defeat in the Western Theater, and only the Battle of Gettysburg resulted in more casualties.

By September 1863, the Union Army of the Cumberland, under the command of General William Rosecrans, was ready to deliver the death blow to the Confederate Army of Tennessee, commanded by General Braxton Bragg. On September 18, 1863, advance Cavalry units of the two armies skirmished briskly at Reed’s Bridge and Alexander’s Bridge, over West Chickamauga Creek, but the fighting was contained in a small area.

The fighting on the 19th started by accident, when, at 2 AM, pickets from Col. Daniel McCook‘s brigade advanced to Jay’s Mill in search of water. At dawn, they discovered Reed’s Bridge, which was thought to have been destroyed on the 18th, was still standing. The Ohioans were ordered to burn it, to prevent Confederate troop movement. Just as they got started, however, Brig. Gen. Henry Davidson’s 1st Georgia of Forrest’s Cavalry Corps charged up to save the bridge. After a fierce melee, McCook’s badly outnumbered force was ordered by Granger to withdraw back to Rossville, harassed by Confederates the entire way. That fighting soon erupted into full scale battle.

Chickamauga Creek was deep, tree-lined, and bordered by rocky banks. The creek was surrounded by vast acres of swampy, impenetrable thickets. The densely wooded, briar-tangled terrain hid troop movements, causing chaos and confusion as soldiers suddenly found themselves in vicious, close quarters combat with unseen and unexpected enemy units. The armies constantly shifted positions as they crashed into each other, but the commanding officers could see little of the fighting or actual positions of their men. On the 19th, the armies slaughtered each other until dusk, with no one getting an advantage. That evening, tens of thousands of reinforcements, from the North and the South, reached the field, preparing for an even larger battle the following day.

On the morning of September 20th, his line battered by repeated Confederate assaults, Rosecrans furiously shifted men to where they were needed most. However, the terrain, and staff bungling, proved disastrous. The heavy woods hid a Federal division from view, causing one of Rosecrans’ staff officers to report that there was a gap in the Union line. Without verifying for himself, Rosecrans ordered General Thomas Wood‘s division to leave their position at the front to fill the non-existent hole. Earlier that morning, Rosecrans had given Wood a very public tongue lashing. Now, Wood, who knew the order to be a mistake, but perhaps being spiteful after Rosecrans’ scolding about following orders immediately and without question, pulled his troops out of line and marched to the north, creating a gaping hole in the middle of the Union line.

Gen. James Longstreet was ready, with eight brigades, 11,000 men, arranged in five columns. At 11:30 AM, Longstreet ordered the charge, unwittingly striking the exact spot Wood had just vacated. The Confederates blasted through the few remaining defenders and were quickly behind the shattered Union line. Two-thirds of the Union army fled in a full panic, throwing their rifles down and sprinting toward Chattanooga, twelve miles away. The Confederates overran Rosecrans’ empty headquarters at the Widow Glenn’s home, and Rosecrans galloped toward Chattanooga with others.

There were a few pockets of resistance. Two brigades, under Brig. Gen. William H. Lytle and Col. Nathan Walworth, slowed the Confederate advance on a slight ridge near the Widow Glenn House. However, Lytle was killed by a sniper’s bullet and his men, now outflanked and leaderless, had to retreat.

The onrushing mass of howling Rebels charged, unimpeded, until they met Gen. Thomas’s desperate stand on the slopes of Horseshoe Ridge and Snodgrass Hill. Thomas would be known as the Rock of Chickamauga after this battle, after he rallied men in broken and scattered groups of squads and companies and began erecting hasty breastworks from felled trees. Bullets zipping past his face, Thomas rode quietly among the men, reassuring and guiding his men. He was described as “Standing like a rock.” General Thomas corps fended off relentless Confederate attacks throughout the afternoon, saving the Union army from annihilation.

Leading the way for the Union, Col. John T. Wilder‘s Lightning Brigade launched a vicious counterattack with its Spencer repeating rifles. The Lightning Brigade’s Spencer rifles, with a rate of fire of 15-20 rounds per minute, compared to the 2-3 shots per minute of the average Confederate’s muzzleloader, were so devastating that Longstreet at first thought an entire corps was attacking him.

Wilder’s men routed one enemy regiment, the 34th Alabama, and forced the 28th Alabama to fall back, capturing 200 prisoners. The Rebels regrouped, however, and launched repeated attacks at Wilder’s, and Thomas’s, positions. The Yankees fought ferociously, holding the Rebels back until dark, and saving the Army of the Cumberland from destruction. Under cover of darkness, the defenders withdrew and rejoined the army on the road to Chattanooga.

By the time the Battle of Chickamauga was over, the Union army was demoralized and broken, and casualties for both sides totaled over 35,000. The victorious Confederates surrounded the Yankees in Chattanooga and put them under siege until November 1863, when the Union Army defeated them at Lookout Mountain and Missionary Ridge and started the Atlanta Campaign.