The main Union assault during the Battle of Kennesaw Mountain was against a a heavily fortified salient on the left flank of the Rebel line, filled with Gen. Frank Cheatham‘s rugged and hard fighting 1st/27th Tennessee Regiment. This bulge in the entrenched line, an inverted V pointing down the hill, would later to be called Cheatham Hill, or The Dead Angle. The fighting on Cheatham’s Hill was the hottest of the Battle, and it was here that Col. Dan McCook would lead the charge of the 52nd Ohio, and Cage Carew would encounter his old friend, Sam Watkins, of “Company Atch” in the combined 1st/27th.

In late June 1864, the progress of Major General William T. Sherman’s Atlanta Campaign was stopped by Confederate General Joseph E. Johnston’s Army of Tennessee’s fortressed defensive line on Kennesaw Mountain and the high ridges outside of Marietta, Georgia. From their position, the Rebels constantly, and easily, harassed and bombarded the Yankees supply lines with destructive artillery fire.

Col. Dan McCook’s brigade, five regiments totaling not quite 1,800 men, including the remaining 400 or so of the original 1,000 in the 52nd Ohio, waited in a Peach Orchard at 8 AM on the morning of June 27th. They stood 400 yards from the enemy lines as the morning opened with artillery barrages from both side. The Brigade was formed in a battering ram column, preparing to assault the most heavily defended position of the Rebel line. 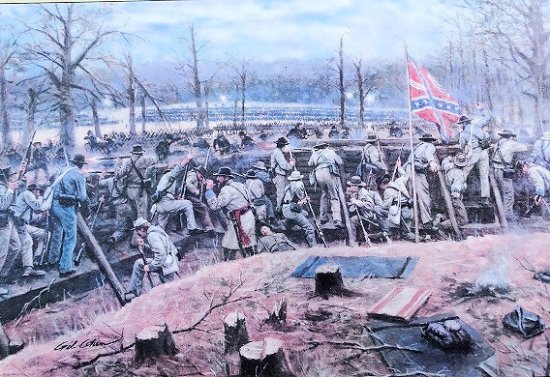 Moments before his men made their charge, with enemy cannon balls and enemy sniper landing amongst them, Col. McCook, turned his back to the Rebels, stood in front of his troops and recited a stanza from “Horatius at the Bridge” by 19th Century British historian, writer, and politician Thomas Babington Macaulay:

Then out spake brave Horatius,

The Captain of the Gate:

“To every man upon this earth

And how can man die better

For the ashes of his fathers,

And the temples of his gods?”

The order to charge was given, and McCook’s Ohioans, and Illinois Regiments, made the desperate charge up the 800-foot bare, steep slope and smashed into the Rebel fortifications under murderous fire. Hidden Rebel artillery swept the field with grapeshot and canister. By noon, the vicious and brutal hand-to-hand combat for the Dead Angle was over. McCook’s brigade had lost 280 men, with the 52nd losing nearly one hundred. The gallant Colonel McCook was amongst the fallen, shot as he leapt atop one of the spiked barricades, slashing at Rebels with his sword and cheering his men on.