Black Seminoles, also called Seminole Maroons or Seminole Freedmen, were a group of free blacks and runaway slaves (maroons) who fled the plantations from coastal South Carolina and Georgia and escaped south into the Florida peninsula. Because slavery had been abolished in 1693 in Spanish Florida, that territory became a safe haven for runaway slaves until it became a U.S. Territory in 1821. Slaves continued to escape, but had to hide deep in the Everglades.

The maroons developed their own unique culture, based in the Gullah culture of the Lowcountry, which reflected a mixture of Seminole, African, and white customs. They lived in separate communities next to the Seminoles, and paid the tribe an annual tribute, usually a percentage of the slave’s crop and livestock. They elected their own leaders, amassed wealth in cattle and crops, and bore arms for self-defense.

In 1828, large gold deposits were discovered in Georgia, and rich American planters lusted for the many prime farmlands that Native Americans had created in Georgia and the new American territory of Florida. In 1830, President Andrew Jackson signed the Indian Removal Act, which forced the removal of more than 4,000 Native Seminole people along with 800-plus Black Seminole allies. They were to be sent to Indian Territory in what is now Oklahoma. Fearing re-enslavement, most Black Seminoles opposed removal to the West.

When the 2nd Seminole War broke out, many black men joined the Seminole Indians as warriors. The Black Seminoles, led the Great Seminole war Chief Osceola and John Caesar, Abraham, and John Horse, they destroyed sugar plantations and recruited plantation slaves to join rebellion. The Second Seminole War, mostly guerrilla warfare deep inside the Florida Everglades, would drag on for seven years. 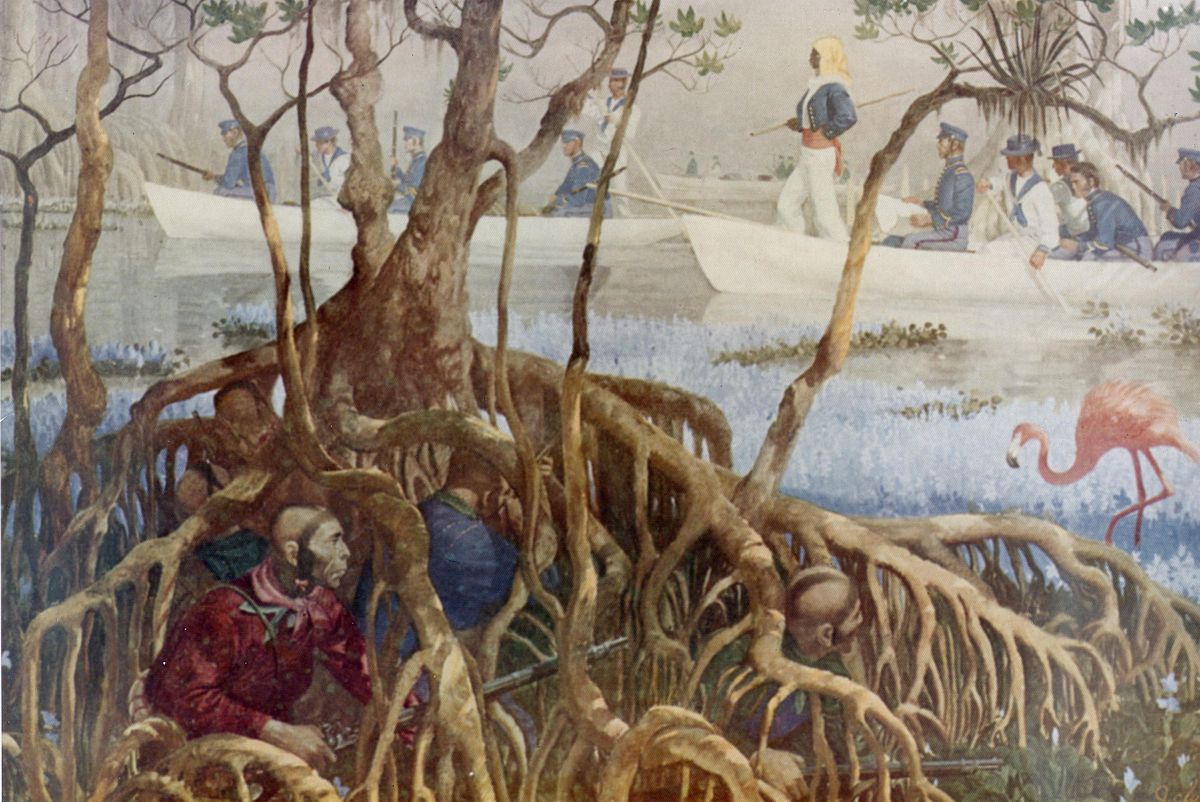 Black Seminoles were skilled at living and fighting in the jungle of the swamp, and were feared for their bravery and ferocity, but after nearly three years of leading the Maroons in non-stop, savage guerrilla fighting and hiding in the Everglades, John Horse finally decided the fight against the Americans was futile. To save his people from annihilation, he agreed to relocate his group, and surrendered 500 Black Seminoles to US troops for resettlement in Indian Territory, west of the Mississippi.

In 1838, the Black Seminoles joined 20,000 Native Americans (Cherokee, Creek, Chickasaw, Choctaw) forced to endure the torturous 5,000 mile march across country which became known as “The Trail of Tears.” In harsh conditions, perhaps as many as 50% of the poorly clothed and starving people died along this trail. Over the next several years at least 100,000 more indigenous people started the journey and at least 15,000 died.

In Oklahoma, the status of Black Seminoles and fugitive slaves was largely unsettled after they reached Indian Territory and the Army refused to support their claims of freedom. The Government put them under the jurisdiction of the Creek Indians, many of whom were slave owners. The Creeks and other slave catchers raided the settlements and captured Black Seminoles, usually women and children, and returned them to their legal owners for a large bounty. In 1849, John Horse and about 180 Black Seminoles staged a mass escape to northern Mexico, where slavery had been abolished twenty years earlier.