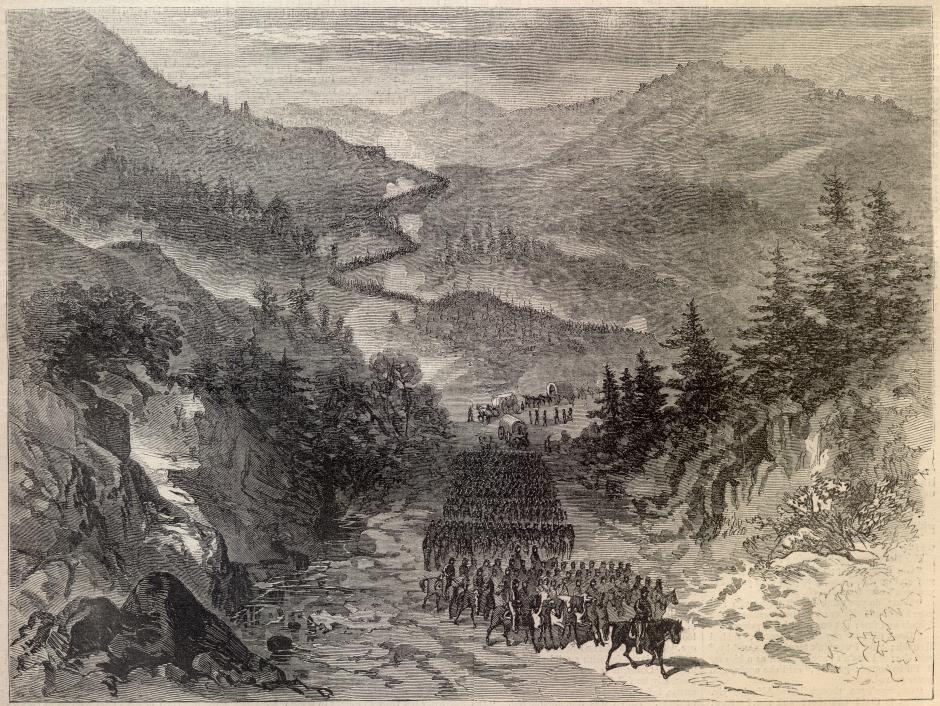 The Battle of Hoover’s Gap was the principal battle in the Tullahoma Campaign, the campaign for possession of Middle Tennessee waged by Union General William Rosecrans‘ Army of the Cumberland against Gen. Braxton Bragg‘s Confederate Army of Tennessee. Conducted from June 24 to July 3, 1863, The Tullahoma Campaign is regarded as one of the most brilliant maneuvers of the American Civil War. In just eleven days, Rosecrans’ Army of the Cumberland fought, but mostly feinted, Bragg’s Confederate Army completely out of Middle Tennessee with a series of flanking maneuvers.

For six months following the Jan. 2nd, 1863 Battle of Stones River, Rosecrans kept his Army in Murfreesboro, spending the time resupplying, building logistics, and training. Confederate General Bragg, headquartered in Tullahoma, Tennessee, maintained his army behind the Highland Rim mountain range about 30 miles south of Murfreesboro. The 45,000 Confederates were spread out in a thin defensive line 70 miles long along the Duck River, protecting the railroads through Chattanooga and the fertile countryside which supplied the Southern Armies. Four narrow gaps, Liberty, Hoover’s, Guy’s and Bellbuckle, gorges barely wide enough for railroad tracks or wagon roads, cut through the steep hills. 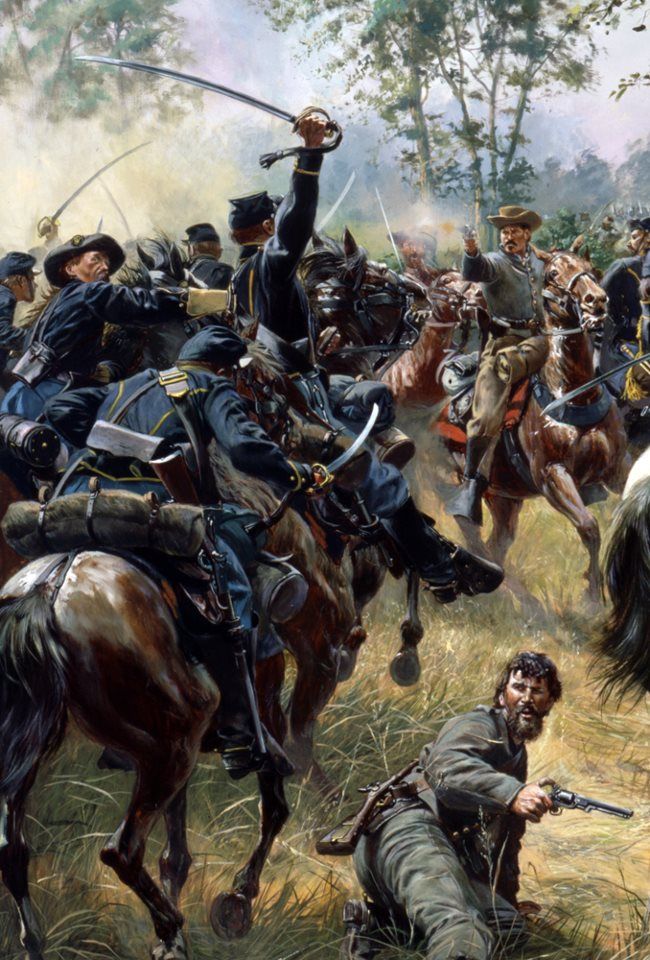 The Rebels expected Rosecrans to march his army around the nearly impregnable Highland Rim, but the Yankee General had conceived an elaborate plan of gambits and diversions through the mountain passes. Early in the morning of June 24, Rosecrans sent the divisions of Gen. Crittenden and Gen. Granger on diversionary movements to the east and west. While Bragg tried to figure out which attack was the main thrust, Col. John Wilder‘s mounted brigade raced for Hoover’s Gap, a four-mile-long valley between two 1100-foot ridges. Armed with the new Spencer seven-shot repeating rifles, Wilder’s mounted infantry brigade struck stunning speed, overwhelming firepower and a savage ferocity. Through mud and standing water, in a drenching rain, the 1,500 men of the 17th and 72nd Indiana, and the 98th and 123rd Illinois regiments, charged down Hoover’s Gap and smashed into the Rebel fortifications.

The brigade’s Spencer rifles fired 15-20 rounds per minute, compared to 2-3 shots per minute from the Rebel muzzle loaders. The Rebels, mostly the Confederate 1st Kentucky Cavalry, were completely unprepared for the speed of the attack and the murderous firepower of the Spencers. After suffering a devastating amount of casualties, the Rebels scattered in chaos. Wilder’s men thrust five miles ahead of their main infantry support, finally entrenching south of the gap after outrunning their supplies. General Rosecrans sent orders for Wilder to fall back, but he refused. The Confederates made several counter-attacked, but were easily repulsed.

Each man in Wilder’s Brigade had privately purchased his rifle after a personal demonstration, by their inventor had convinced them of the weapon’s tremendous battlefield superiority. Wilder had originally been told the Army would purchase the weapons, but after months of foot dragging and cumbersome red tape, Col. Wilder had negotiated a private contract with the rifle’s inventor, Christopher Spencer. Using his own personal wealth as collateral, Wilder obtained a loan through his hometown bank for 1,500 rifles at a cost of $35.00 a piece, almost equal to three months pay for an enlisted man. When the Army was similarly slow in providing mounts for his pioneering “Mounted Infantry Brigade.” Wilder sent his men into the countryside to confiscate Kentucky racing Thoroughbreds and gaited Tennessee Walkers. When they’re weren’t enough saddle horses for everyone, Wilder’s also confiscated the mules pulling supply wagons.

By the time the rest of the Army caught up with Wilder, torrential rains made pursuit of Bragg’s Army impossible. However, Rosecrans had divided, outflanked, and completely outsmarted the panicked, exhausted, and furious Bragg, who abandoned Tennessee. With only 569 casualties, including 83 killed, the Union army now controlled a huge agricultural region, and gave them control of the strategic city and railroads of Chattanooga. The Northern press barely seemed to notice, obsessed as they were with reporting on the huge battle on Northern soil, Gettysburg, which concluded on the same day as the Tullahoma Campaign. The pugnacious Rosecrans, though greatly loved by the men below him, had a blunt, bristly personality that irritated most of his superiors. President Lincoln, General-in-Chief Halleck and Secretary of War Stanton barely sniffed at Rosecrans accomplishment. Rosecrans was infuriated and shot off several telegrams, such as the following: “You do not appear to observe the fact that this noble army has driven the rebels from middle Tennessee….. … I beg in behalf of this army that the War Department may not overlook so great an event because it is not written in letters of blood.”

Lincoln later conceded: “The flanking of Bragg at Shelbyville, Tullahoma and Chattanooga is the most splendid piece of strategy I know of.”