By the spring of 1864, Fort Pillow, on the banks of the Mississippi River in western Tennessee, had changed hands several times in the War. Now, the Union controlled it, and the fort had become a stronghold for black freedmen and escaped slaves, Southern Unionist politicians and businessmen, and Confederate deserters. The state of Tennessee was violently divided, probably more than any other state, before and during the War. The Confederacy, and both the Confederate and Union armies recruited soldiers from the state. More than 100,000 men from Tennessee served with the Confederacy, and over 31,000 served with the Union.

In April 1864, Fort Pillow was defended by 585 men of the 13th Tennessee Cavalry, made up of local Unionists and Rebel deserters, and six batteries of the Second and Sixth United States Colored Artillery regiments. The former slaves were terrified of being taken prisoner, since Confederate President Jefferson Davis had publicly promised to execute captured black troops and their officers. General Nathan Bedford Forrest, the Confederacy’s most daring and feared cavalry officer, and a local resident, invaded West Tennessee, conducting raids to capture supplies and disrupting the Union army at every opportunity. He believed Fort Pillow would have a rich bounty of horses and supplies for his men. which we need.”

On April 12, 1864, Forrest’s 1st Division of his Cavalry Corps, about 2,000 men, launched a pre-dawn attack. Hundreds of his sharpshooters, hidden in the dense forest that nearly encircled the unsuspecting fort, cut loose just as the sun came up, immediately killing all the pickets and artillerymen. The riflemen kept up a murderous attack on the fort for several hours, taking a heavy toll: One by one, the officers and soldiers in the fort fell dead or wounded.

At about 2 p.m., Forrest, under a flag of truce, sent a note to the fort’s commander demanding surrender. He pledged to treat all soldiers inside as prisoners of war. “Should my demand be refused,” Forrest’s said, “I cannot be responsible for the fate of your command.”

Major William Bradford, now in command of the fort, refused to surrender, and the Rebels unleashed a full scale assault. Chaos ensued, and with few officers left alive to organize them, some of the fort’s defenders dropped their weapons in surrender. However, the outraged Forrest, who’d had two horses shot from underneath him that day, and more than 30 in the War, had made the attack under a black flag, meaning take no prisoners. 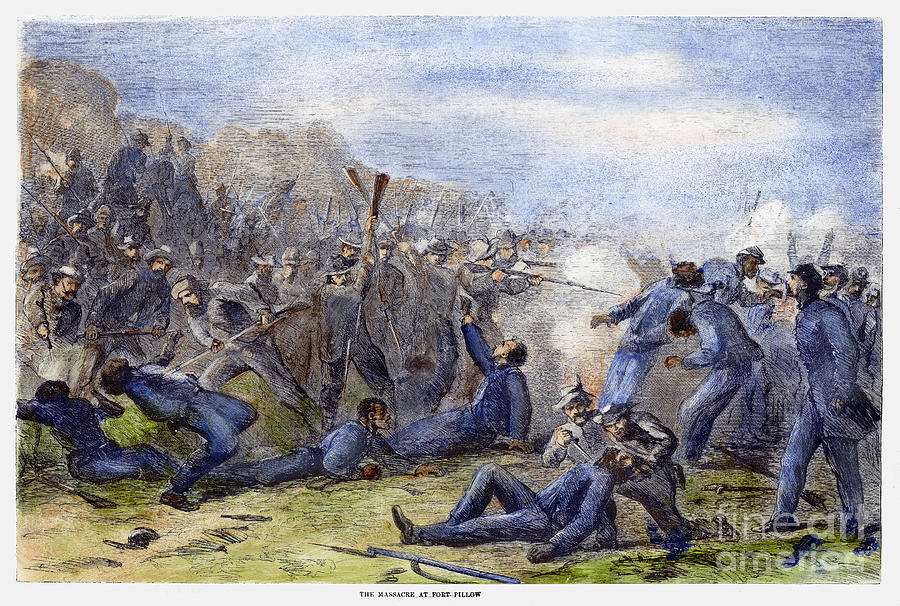 The battle became a massacre. When unarmed blacks, including the U.S. Colored Artillery batteries, freedmen and escaped slaves, threw up their hands they were shot down without mercy. Many Yankees tried to flee out the back of the fort, which was a high, straight drop off into the sandbars and shallows of the mighty Mississippi River. However, once they had slid down the high bank, they were trapped below, wand picked off easily by the hundreds of Confederate sharpshooters still on the bluffs above. It was reported that “The river was dyed with the blood of the slaughtered for 200 yards.”

300 of the men in the fort were killed that day, while Forrest only lost 14 men. The battle would become known as the Fort Pillow Massacre, and is one of the most notorious and controversial incidents of the Civil War.